Do the hard thing 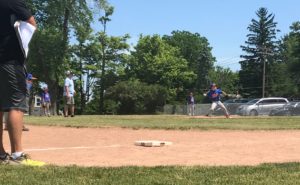 William pitched his first inning yesterday. He did great. Though that’s not how he saw it at the time. The Nationals scored 5 runs with William on the mound. Though they scored them due to fielding errors. So there weren’t any earned runs. Which is good for a first timer. I was most impressed by his courage to do the thing. He’s been practicing for this moment. It’s been painful at times. He takes some things quite seriously. Baseball is one of them. He expects a lot from himself and gets moody when he falls off the pace. He isn’t eager either to draw attention to himself. So volunteering to pitch is a big deal for this kid. Coach asked him if he wanted to. Initially he said, “No.” But then he changed his mind and asked Coach if he could pitch. The rest is just details and I’m not including them here. He feels better about it today. I feel proud that he did the hard thing. It makes me want to do the hard thing, too.

A little more about Erik Eustice...

Our 2nd book is a compilation of our 41 most popular writings from 2014. Plus four bonus writings. Click the image to get your copy today.